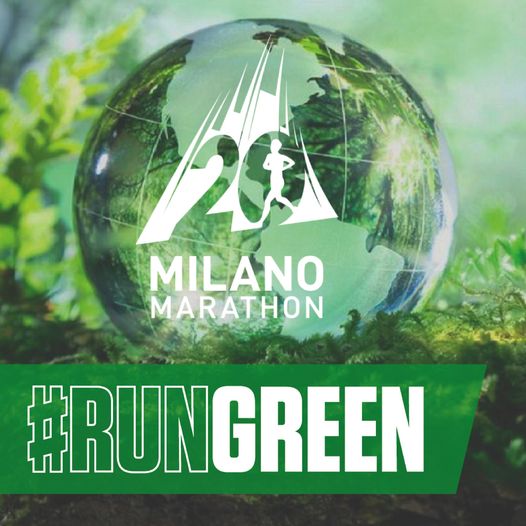 Milano Marathon, greener than ever

Milano Marathon is a sporting event of international importance, both for its technical level and the numbers it generates in terms of registrations and fund raising. Its Charity Program, for example, is second only to the London Marathon. In the world, though, not even the sporting events can measure their success just in terms of performance. They have to deal with the current climate changes and the need to become ever more eco-sustainable, as indicated by the latest COP26 in Glasgow and also planned in the Agenda 2030. Hence, the decision made by RCS Sports & Events, the organizer of the event, to keep on pursuing this direction, but with greater momentum, by creating the Run Green Project.

CO2 emissions produced by the XX Milano Marathon will be offset with a number of activities taking place both in the days of the event (such as the selective waste collection in partnership with AMSA through specific recycling points and the collection of running shoes that are used during the Milano Running Festival, which precedes the event) and later, with the No Waste Project that involves a charitable donation of the left-over food & beverage as well as a series of plogging sessions with the organization (that is, collecting the waste along the way while jogging or carrying out other sports activities outdoors) in different areas.

Climate Partner (climatepartner.com) teams up with RCS Sport & Events in the Run Green Project. The German company will issue a “carbon neutral” certification following the investment in the Stopping Ocean Plastic Project for an amount equal to the non-reducible event-related CO2 emissions.

With Climate Partner, on Friday 1 April, during the Milano Running Festival – the running fair linked to the marathon that takes place from Thursday 31 March through Saturday 2 April at the MiCo-Milano Convention Center in City Life – a workshop on the sustainability of grand events in modern cities is scheduled. With the participation of the insistutions and variuos partners, it will be the occasion to discuss a current topic in line with an event such as the Milano Marathon.

It is a proper team work that involves not only the organizer of the event, but all the parties, ranging from the institutions to the commercial partners. The Comune di Milano, for example, will try to discourage the use of cars and power-drive vehicles on that day by giving the runners the possibility to use the public transport for free, in agreement with ATM, to contribute to raise the aspiration for sustainable mobility.

Those who come from outside Milan can use the Milano Marathon section in the new digital platform FlexyMob (milanomarathon.flexymob.com). It puts together different mobility services (local public transport, busses, taxis, car rentals, car sharing, car parks) that enable the users to book their trips even in real time with a few clickc, sparing time and decreasing the traffic, and consequently CO2 emissions.

As we said, we are not starting from scratch, but we continue along a path we took in 2008 with Eco-Way, which recognized the Milano Marathon as “the first race with C02 emissions neutralization”. It continued in 2013 and 2015 when, as a sustainable event, the Milano Marathon was awared the Gold Certification by the Council for Responsible Sport.

The sixth edition of LEVISSIMA SCHOOL MARATHON – the children race scheduled on Saturday 2 April in City Life – is also inspired by sustainability values. It features a 3km route, in partnership with OPES (Organization for Sport Education). The event includes an educational project to raise awareness about the importance of outdoor activities as the foundation of a healthy lifestyle and the importance of sport values and environmental sustainability among the pupils of Milan’s primary and middle schools.

The registered classes can participate in a variety of contests, from the creative ones that precede the event (THE MASCOTTE for the primary school children, MIND THE WALL! for the middle school students, PLOGGING   SCHOOL for all the children) to ONE KILOMETRE OF SUPPORTERS, for both primary and secondary schools, in which the registered schools can pick one kilometre of the 42km race route (better if closer to their school). On the race day they will colour and make that stretch of the road alive, with songs, banners and other activities to support the runners. The children will have to take photos and videos and send them to the organizational secretariat. In the following days the winners of the contest will be announced.

In 2019, the year of the last edition, the event has seen the participation of over 13,000 young students aged 6-14 with the adults in charge. Registrations are open on the website in a dedicated section: milanomarathon.it/school-marathon.

Comune di Milano and Regione Lombardia. La Gazzetta dello Sport with Gazzetta Active for the second year in a row is linked to the Milano Marathon as Special Media Partner.