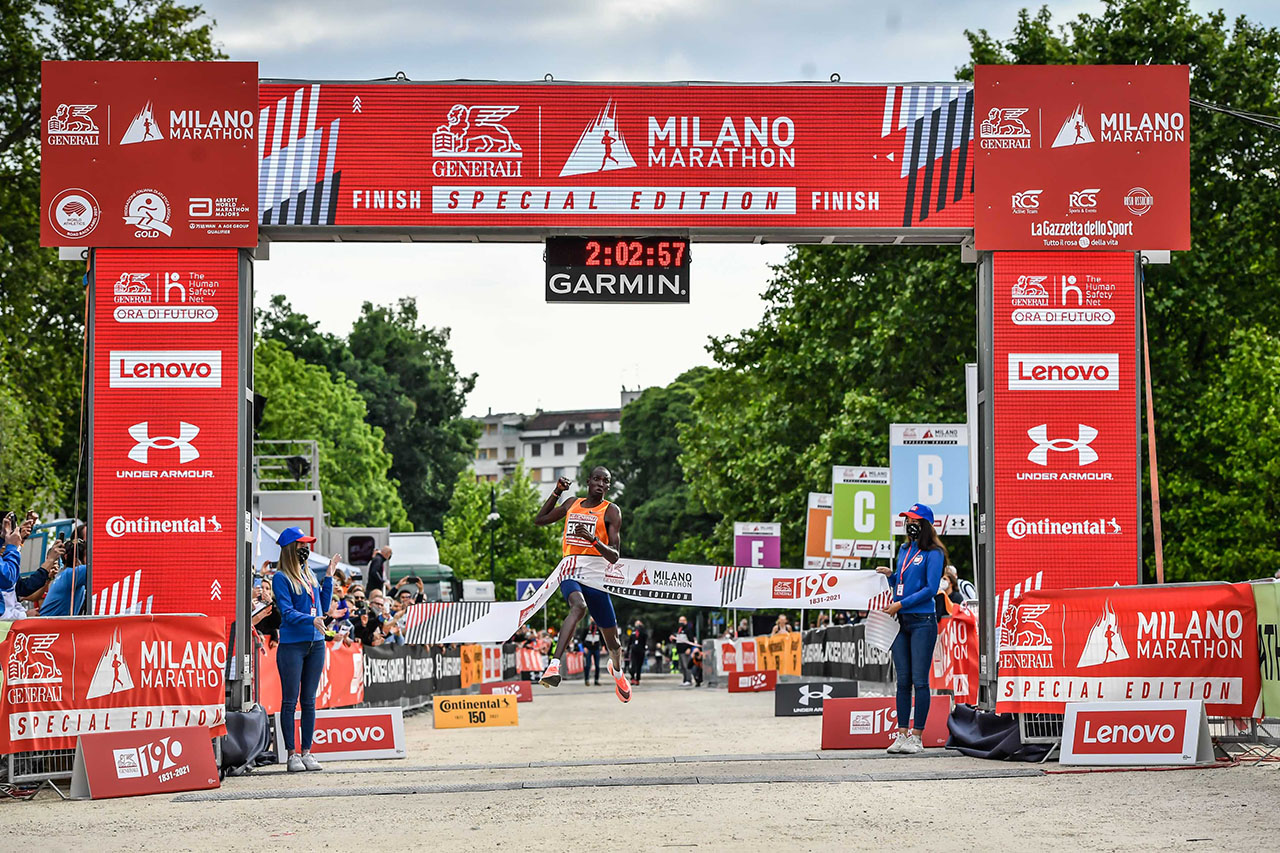 Milan in the history of marathon

Milano, 16 May maggio 2021 – The best time trial of the year worldwide and the best time trial ever on the Italian soil both in the Men’s and Women’s Races: Milan enters the legend and confirms itself as the Italian capital city of running with an international event. It is the fastest marathon in Italy: no one has ever run as fast, neither in Italy or worldwide this year.

At the 2021 Generali Milano Marathon Special Edition, organized by RCS Sports & Events, this morning at sunset, Titus Ekiru and Gebremaryam Hiwot Gebrekidan have written the history of the longest, most appealing and gruesome race by claiming the victory respectively in the men’s race in 2h02’57” and in the women’s race in 2h19’35” and demolishing the Italian all-comers marathon records. An ideal climate (fresh and dry) and a superfast course (a 7.5 circuit to be covered 5 times after an intial 4,695m loop) favored exceptional performances and confirmed the Generali Milano Marathon as Italy’s fastest marathon.

In the men’s trial, the time to beat was 2h04’46”, the old record in this race, and 2h04’30”, the best world record this year set by the great Eliud Kipchoge. When, at the 35th km of racing the ‘hares’ have finished their task and left the champions by themselves, Eriku’s powerful action kicked off and fragmented the whole group. The Kenyan athlete sped up to set a top time trial result and took first nonce again in the shadow of the Madonnina after his 2019 success. In the women’s field, Hiwot Gebrekidan dominated even more clearly: at the half-marathon, she was already leading by 20 seconde. The first Italian overall, Alessandro Giacobazzi, 29th, hit the line in 2h17’36”.

To confirm the exceptional performances, the stats show that the top four men athletes ran below this year’s world times and the winners of both men’s and women’s time trial had the best times ever set in May. Another important piece of data is that the 2021 Generali Milano Marathon Special Edition is the fastest marathon of the marathons ever held in May and the sum of the man and woman winner’s times set it as the seventh fastest marathons ever

HERE ALL THE CLASSIFICATIONS OF THE GENERALI MILANO MARATHON https://api.endu.net/r/r/59620

“I thank God for my achievement, the weather conditions helped me a lot”, said Ekirus Titus. “I was sure about my form and past the 30th kilometre, I decided to push and try to make some selection. I ran below 2h03” but I want to improve further.”

“It was a fantastic race, I improved my personal record by around four minutes,” said Gebremaryam Hiwot Gebrekidan. “I must thank the pace-maker for the excellent help, I am really happy and hardly believe my result.”