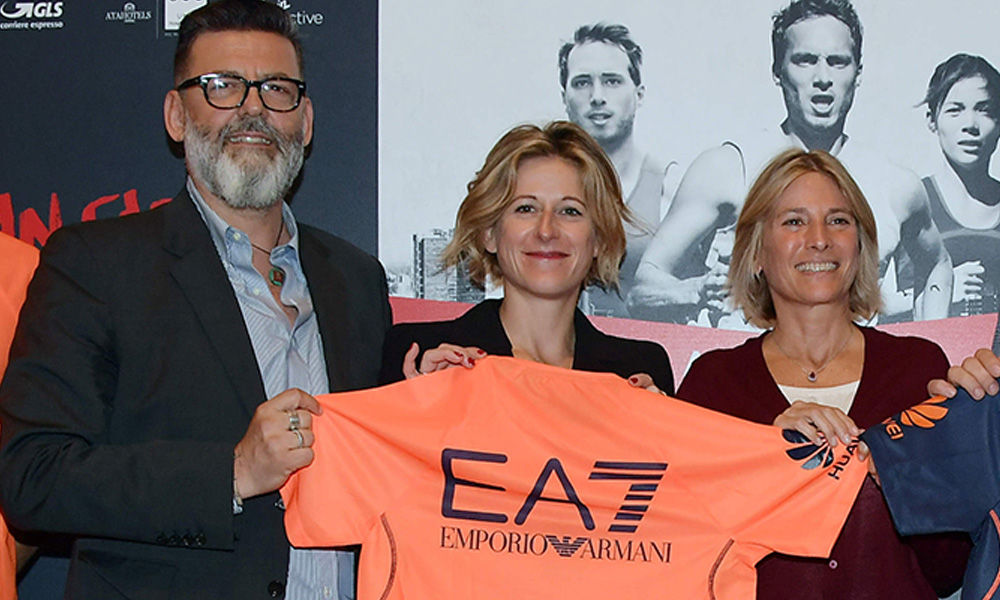 Following the tremendous success of last year, S.S.D. RCS Active Team and RCS Sport officially present the 18th edition of EA7 Emporio Armani Milano Marathon, which will take place on Sunday 8th April 2018 with start and finish in Corso Venezia, in the heart of Milan.

Results of the event continuously improved during the years, up to the record edition of 2017: number of registered runners, number of marathon finisher (+43% compared to last year) and, above all, marathon finishing time that allowed Milano to become the fastest marathon ever run on the Italian soil.

In 2017 there were 6.309 registered marathon runners, 3.059 four-person-teams in the Europ Assistance Relay Marathon and 6.253 participants in the Milano School Marathon, among children, young adults, parents and teachers.

From the competitive point of view, the race was won by Edwin Koech in a personal best time of 2h07’13”, new record of the Milano Marathon, best “all-comers” performance in Italy. Behind him, the other Kenyan Kenneth Mungara in 2h09’37”, followed by Ethiopian Abdela Godana in 2h10’05”. On the top spot of women’s podium the Kenyan Sheila Chepkech with 2h29’52”, followed by Sicilian Anna Incerti (2h29’58”) who had to give up in the last meters after a long face-to-face. Third place for Ethiopian Waka Chaltu Tafa, in 2h31’38”.

THE PARTNERSHIP WITH EA7 EMPORIO ARMANI, A PRECIOUS COLLABORATION

The collaboration between Milano Marathon and EA7 Emporio Armani goes on in 2018: once again, the exclusive brand will be Title & Technical Sponsor of the Milanese 42km.

The technical shirts, produced in two colours – one for the marathon and one for the relay – and coming in men’s and women’s version, will be sponsored by EA7 Emporio Armani and they will make Milano Marathon even more appealing to the eyes of Italian and foreign athletes.

Completely renewed for the 2015 edition, the route has been constantly modified and refined, with the purpose of optimizing it both in the immediate and in the long run prospective.

In 2018, working together with ATM and the Municipality, we are focusing in particular on improving the pre-start and post-arrival logistics, in order for the flows to be more linear, and on the initial kilometres of the track, in order for them to be larger and smoother, and so suited to allow the flow of a bigger number of runners without creating any slowdown.

In 2018 the Marathon Village will take place again inside the MiCo LAB, at level 0 of the North wing of Milano Congressi, with a practical access from Piazzale Carlo Magno.

An exhibition space of more than 5.000 Sqm, for a village that aims at becoming more and more rich, dynamic and interactive for the runners participating to the event, but also for Milanese people with an healthy lifestyle and for the curious ones.

Europ Assistance Relay Marathon, non-competitive race for team made of 4 people, mainly aimed at runners who want to link physical activity and a choice of deep ethical value, will come along the competitive marathon for the ninth year in a row.

Starting from its “edition zero” in 2010, the relay has always been matched with Europ Assistance that, thanks to its partnership, recently renovated for two more years, will also be the official supplier of the marathon for what concerns the health care service, one of the excellences and of the distinctive features of the Milanese 42km.

The three changeover points are confirmed (via Pagano / via del Burchiello, viale Caprilli, via Croce). Each fraction is long between 7 and 13 km.

Just a month since the opening of registrations for next year’s Charity Program, 90% of the packages available have already been allocated. Thanks to the Non Profit Organizations that chose to take part to this great fundraising initiative, last year EA7 Emporio Armani Milano raised almost 1.5 million Euros, consolidating its leading position among the single sports events in Italy.