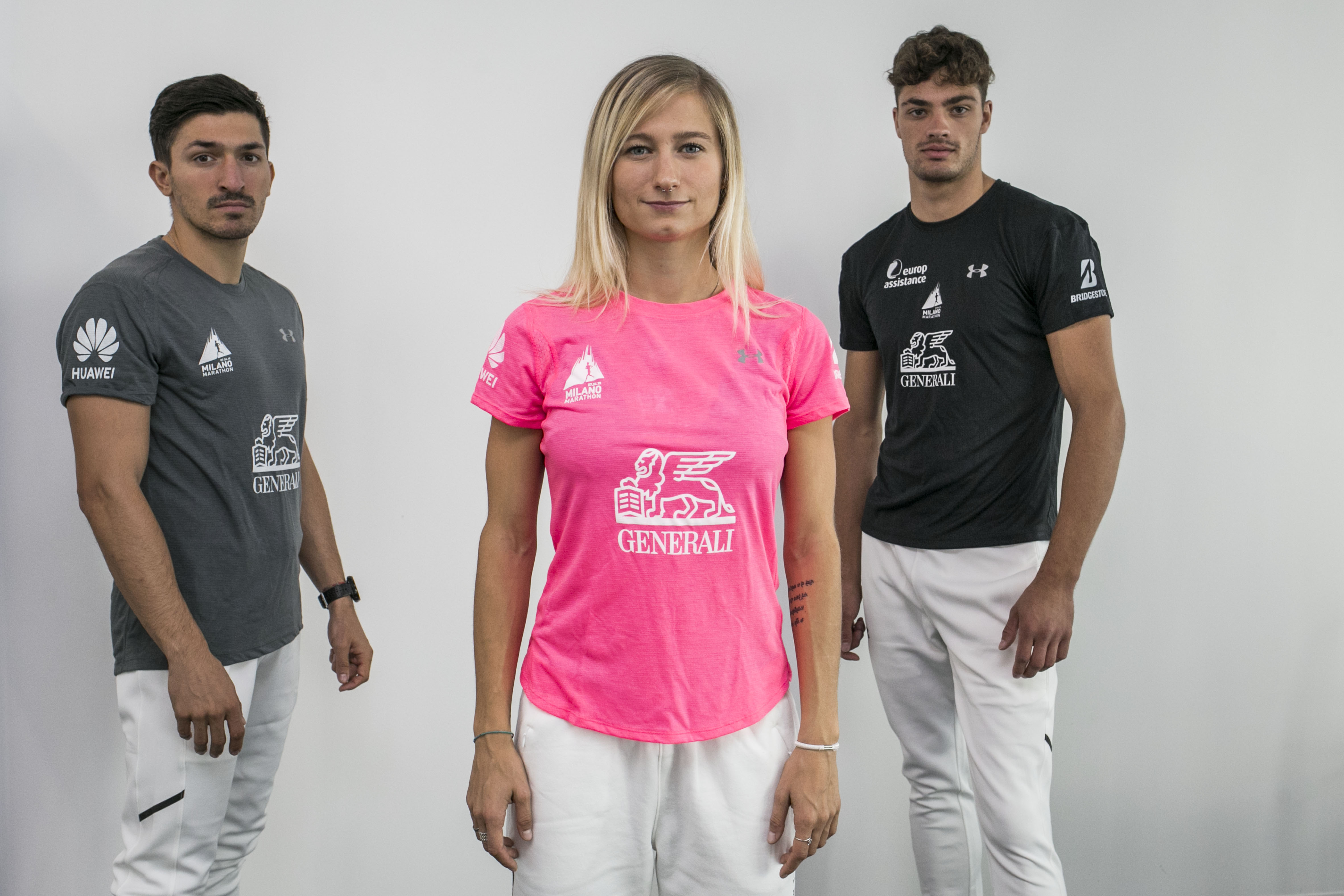 All the news of the Milano Marathon 2019

This morning the 19th edition of Generali Milano Marathon has been presented in the futuristic Generali Tower, in the heart of CityLife in Milan. The international event will take place Sunday 7th April starting at 9AM in Corso Venezia, in the middle of the historical center of Milan.

Cristina Fantoni, LA7 journalist, has hosted the presentation and  has introduced the speeches. Urbano Cairo, RCS Media Group President and CEO, has been the first to speak highlighting the strong bond between the marathon, the institutions and the city: “I wanted to be here today to thank Generali for their hospitality and willingness. The marathon, the Europ Assistance relay marathon and Bridgestone run dedicated to the kids, events with a great participation and international appeal, are a powerful aggregation tool. Our Group counts on running and on sport in general. The Festival dello Sport in Trento is an example. It registered a great success. Moreover, the partnership with Generali, one of leading insurance companies in the world, proves the importance of our marathon inside the calendar of famous races, bringing even more attention to Milan”.

The first big news of this edition is the partnership with Generali, insurance leading company in the world, as Title Sponsor. Simone Bemporad, Director of Communications and Public Affairs of Generali, has stated: “We are proud of this partnership with Milano Marathon, with whom we have had a beautiful participation through Europ Assistance. We are happy to do this here in Milan, a city symbol of international success. The marathon symbolizes, more than any other sport, widespread participation, captivating people of all ages and that is why Assicurazioni Generali supports the event as Title Sponsor “.” Generali will be present at the event with The Human Safety Ney, a global project based on the belief that building a community of people who help other people could bring a long-term change.

RCS Sport Chief Executive Officer & General Manager Paolo Bellino has opened his speech with the greeting  to the Milan Major Giuseppe Sala. He stated: “We are proud of renewing the sport event Milano Marathon, which has reached the XIX edition. An event dedicated to all the running enthusiasts, to  all sport passionate and to all interested in a healthy physical activity. It brings prestige to our city. It is a successful sport event, capable of putting together passion and fun, with a great social impact thanks to the supportive relay and to the involvement of school through the School Marathon. A four day event even more international which involves a lot of foreign runners attracted by the route and by the many opportunities that Milan could offer. Our goal is making the Marathon even more important, a solid support to candidacy of Milan for the Olympics. We want that all the citizens will be involved and will take part in this sport manifestation. Sport represents an engine for the growth and development of the territory. This event will confirm that Milan is the real sport capital.”

Representing the city of Milan there was Anna De Censi who has addressed to the organizers the greeting from Roberta Guaineri, Tourism, Sport and Quality life Assessor, underlining the importance of the event as a sporting and social event.

Then, Bellino continued drawing a general evaluation of the event: “ The 2018 has strengthened the Milano Marathon as one most important sport event for the city, capable of involving both sport enthusiasts and citizens, increasing progressively the appeal for international runners. Our goal for the 2019 is to achieve the 35.000 participants, following the Berlin model, a race which has been able to grow progressively both in numbers and technical results”.

One of the greatest news for the 2019 edition is the transformation of the Marathon Village in a big expositive hub (around 8.000 mq), around which there will be entertainment activities, try&buy, Forum/clinic activities and the presentation of products and events. The Initiative will take the name of Milano Running Festival and it will take place from Thursday 4th April to Saturday 6th April, becoming  a moment of aggregation for those who work in world of running, fitness and sport tourism and for the real runners.

Generali Milano Marathon will count on the support of the prestigious sport journal Gazzetta dello Sport: “ In the sport communication the atmosphere is quite, it is time dedicated to ourselves, it is always a positive discover, as we saw during the Trento Festival” The Gazzetta Director Andrea Monti has stated. “My expectations? To bring 20.000 runners on the streets of Milan. This year we will be happy to increase the space in our journal to include at least 6 thousand arrivals”.

Then, Andrea Trabuio, RCS Sport Mass Events Technical Manager and Milano Marathon Director, has gone into the details of the event and into the programs of the numerous initiatives.

Around the village, in the CityLife area, will take place the 5th edition of the Bridgestone School Marathon, not-competitive race organized with OPES and dedicated to the kids and to their tutors (parents, relatives, teachers). After the extraordinary success of the last year – with 10 thousand participants at the starting line – in 2019 the event will be held on Saturday 6th April on a route of 3km. Regarding the partnership with Bridgestone as Premium Partner and Title Sponsor, Stefano Parisi VP Bridgestone South Region, has stated: “Our presence at the event is connected to the motivational campaign “Insegui Il Tuo Sogno, Non Fermarti Mai” which wants to inspire people to believe in themselves and to realize their dream, despite the obstacles. Three Olympic athletes will join us in this journey: Gianmarco Tamberi, Gregorio Paltrinieri and Valeria Straneo who will tell how they stayed focus on realizing their dreams”.

As the past editions, beside the competitive race there will be the Europ Assistance Relay Marathon, not competitive relay race for 4 members teams, dedicated to runners who want to combine sport with a strong etic value and to raise funds for one of the 100 not profit organizations that have supported the Charity Program. With over one million of funds raised in total, the supportive project – which has as organizational partner the fundraising platform Rete del Dono – even in 2018 has confirmed itself as leader among the initiatives of this kind for dimensions, complexity and entity in the fundraising.

The 2019 will be marked as the tenth year of sponsorship by  Europ Assistance, supplier of the precious serivice of medical assistance. “It is difficult to imagine the resources used to manage the medical safety of the runners. Being a Caring Company means taking on the responsibility of helping people in every context. The credibility of who is leader in the market joined to reliability and ease of assistance are the elements that have made this partnership a successful that lasts since 10 years.” Gianluca Zanini, Europ Assistance Italy Chief Sales, Marketing and Communication Officer, has stated.

RDS 100% Grandi Successi will be the official Radio Partner of the event and will propose again the RDS Music Marathon: “RDS Music Marathon is a musical marathon which will give rhythm to the marathon, in a original scenario with the music 100% protagonist. The RDS Music, Sport and Entertainment format represents the perfect mix between music – offering to artists the chance to perform in front of the public – and the sporting spirit of the athletes, who will receive energy from the music” the General Manager Massimiliano Montefusco has said.

Among the other news there is the project related to the Runnin’City app, that allows the runners and the tourists in Milan to discover the city running three thematic routes (Passeggiata a City Life/ Un po’ di verde/Il percorso culturale) “extracted” from the race track. Moreover, Ekis, leading company in coaching services in Italy, will make available to the runner the “Correre con la testa” program. The aim is to make the sport activity as complete and fascinating as possible, allowing the participants to live fully the event, giving the maximum effort and satisfying personal expectations: who has a timing goal, who is enthusiastic, who has imagined it as a challenge against himself.

The female training program MyMarathon, created in collaboration with the writer and coach Julia Jones, will be back.

Closing the presentation the speech of Davide Costanzo from Under Armour, activewear brand from Baltimora, new Technical Sponsor of the race: “Under Armour strongly believes in the team values and in practicing sport together: for this reason it decides to partner the Milano Marathon in the next edition and to support all the runners. Our Collaboration represents the celebration of shared sport values and consistent with the new global campaign that launches the message “Will Make Us Family”. Has stated the Marketing Manager.

Before the ending greetings, Costanzo has revealed the new technical jerseys, in different chromatic variants for the relay race and the marathon, wear by three exceptional models: the triathlete from Alto Adige Jakob Sosniok; the sprinter/hurdler and also blogger/personal trainer, Beatrice Mazza;  the former athlere who is athletic trainer, Francesco Maurello.

Registrations for the XIX edition of the Generali Milano Marathon are open this link.