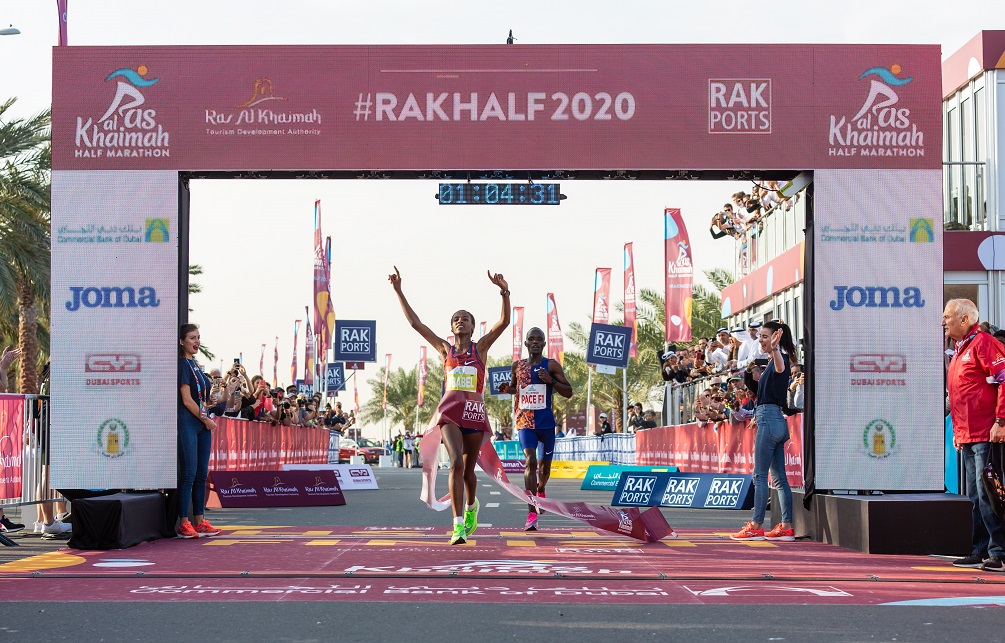 By Silvia Forastieri21 February 2020No Comments

Ababel Yeshaneh from Ethiopia and Kibiwott Kandie from Kenya were the winners of the 2020 Ras Al Khaimah Half Marathon, held on Al Marjan Island earlier today (Friday, 21 February). On a day that saw a record-breaking number of runners tackle the various race formats, Yeshaneh became the fastest woman in history over 21.0975KM with a time of 64:31 while Kandie triumphed in 58:58.

Renowned as the world’s fastest half marathon, the 14th edition of the Ras Al Khaimah Half Marathon attracted 5,200 professional and novice runners across a variety of categories that included full half marathon, a relay, 5 km and a 1 km fun run. Offering a total prize purse of AED 1,219,000, the Ras Al Khaimah Half Marathon this year covered a brand new course, located against the stunning backdrop of the Arabian Gulf.

Yeshaneh claimed victory in a new women’s world record time for the half marathon in a time of 64:31, smashing the previous record by 20 seconds and outdoing her previous personal best by over a minute. Yeshaneh continues to enjoy success in the United Arab Emirate having been victorious in the 2018 ADNOC Abu Dhabi Marathon. She was followed by Brigid Kosgei in second place with a time of 64:49, beating her personal best by 39 seconds as well as the old world record. Third place award went to Kenya’s Rosemary Monicah, who secured a time of 65:34, a world record for a debut.

Yeshaneh commented: “I’m very happy with the result. When I woke up this morning I did not expect to break the world record. I intended to run fast and beat my personal best. It was a very competitive race as I was up against Brigid who is the marathon record holder, so my plan was to keep pace with her and it worked.”

Kandie said: “I trained very hard ahead of this race and so I am not a surprised by my time. I knew that I could get a time under 59 minutes but the victory is sweet. While I began to feel the effect of the warm weather at 16KM, I was still able to run a sub-14 minute final split.”

Raki Phillips, CEO of Ras Al Khaimah Tourism Development Authority, commented: “We are so proud to have hosted this record-breaking race. We’ve seen some incredible performances from the elite runners and also welcomed over 5,000 participants of all kinds of abilities as they have enjoyed the event and its beautiful location.  We have attracted many world-class events and hotel partners, that have combined to make Ras Al Khaimah an excellent destination. Over the last 14 years, the Ras Al Khaimah Half Marathon has achieved an enviable status in the region and we look forward to growing further as we continue to attract to more visitors and tourists to the Emirate.”

A special feature of this year’s Ras Al Khaimah Half Marathon was the new race village that was set up adjacent to the starting and finishing points. Thousands of visitors and participants were able to watch live footage of the race on the main stage screen, enjoy a wide range of family entertainment options, including crazy golf, mini bowling, and a bungee trampoline, visit the sponsor booths, and choose from a variety of food and beverage options.