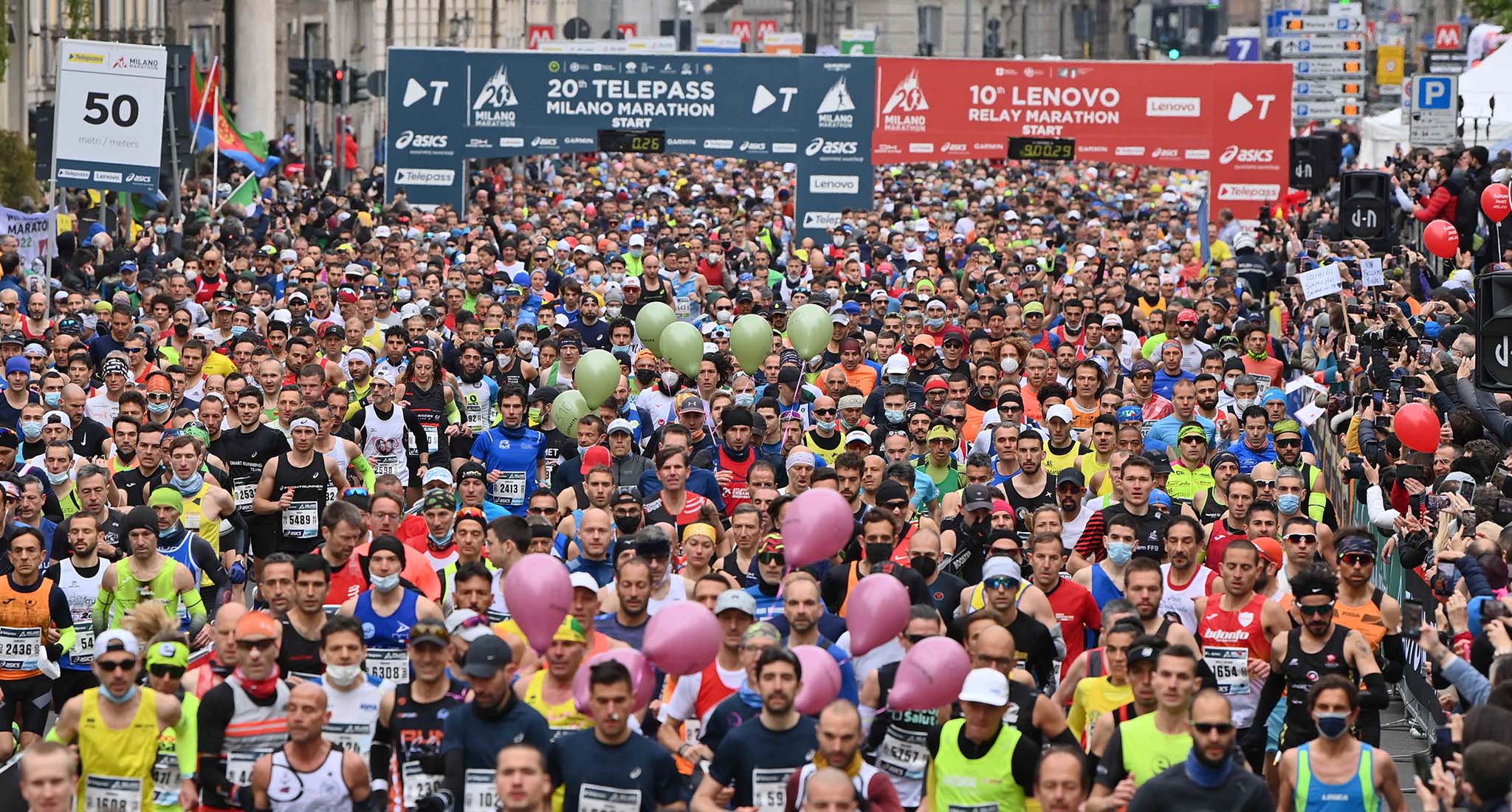 By Silvia Forastieri4 April 2022No Comments

The city of fashion and design and the Italian capital city of running. Milan is confirmed as the queen of the Italian marathon and, yet another time, yields a day of great sport. With both the marathon and the relay marathon, more than 13,000 participants.

Perfect weather (cool and dry) on the 42 kilometres 195 metres course across the capital city of Lombardy of the still fastest marathon in Italy that, in a virtual battle among European capitals, beat by a few seconds the Paris marathon that took place at the same time.

Titus KIPRUTO won the Telepass Milano Marathon 2022 finishing in 2 hours 05 minutes 05 seconds, his new personal record. In second place Daniel KIBET who hit the line in 2 hours 05 minutes 20 seconds, and Alphonce Felix SIMBU took third in 2 hours 06 minutes 20 seconds. A great performance for Iliass AOUANI, an athlete from the Fiamme Azzurre debuting in the marathon: his time at the finish was a dramatic 2 hours 08 minutes 34 seconds that earned him the tenth place, first among the European athletes. It is the fastest debut ever in an Italian marathon. Among the women, Vivian KIPLAGAT’s successful victory in 2 hours 20 minutes 18 seconds – her new personal record and third-time winner in Milan.

The city offered its best – its roads without any traffic and ideal weather conditions – to welcome the first major event after the end of the state of emergency. Lots of participants: at 9 sharp, the colourful lined-up flow of runners at the start line in Corso Venezia rolled for almost 5 minutes, with the pacers and the champions chasing the victory and their personal best up front followed by the multitude of enthusiast runners engaged in the longest, most appealing and most gruesome race. Then some of the most iconic places of the sporting city: Parco Sempione, Monte Stella, the horse racing track San Siro, Parco di Trenno; as well as City Life and Milan’s symbol, i.e. piazza del Duomo. And after two hours and a hadful of minutes, the course itself showed who was the best athletes: Titus Kipruto and Vivian Kiplagat, the winners of the 20th Telepass Milano Marathon respectively among the men and the women.

But the Milanese Sunday offered much more. Three anniversaries were celebrated today: the twentieth edition of the Milano Marathon, the tenth edition of the Lenovo Relay Marathon and the birthday of the Gazzetta dello Sport, that was born 126 years ago on 3 April 1896.

THE STATEMENTS OF THE DAY

Titus KIPRUTO, first in the men’s classification, said: “The first part of the course, with the cobblestones and the less than perfect pacers, affected the pace. In the second part I felt very good and took the reins of the competition. I had already decided to make my move at the 40th kilometre and that was it. With Kibet, my daily training partner, we got along well until the last kilometre, when I increased the pace and pulled away. I was always checking behind to avoid him coming back. I know how good Kibet is, as we share every training session and every effort. Congratulations to the organisers and the city of Milan for a beautiful race in a beautiful city.”

Vivian KIPLAGAT, first in the women’s classification, said: “Winning in Milan for the third time is something unique for me. I am really happy. I had a little problem with my calf at the start, but I held on and managed to win. I am glad to have achieved my personal best here in Milan. Knowing that my training partner Judith Kiptum won Paris makes me even happier. In the race I was always in control, sure of my value: knowing my condition, I never had any doubts about my tactics.”

Ilias AOUANI, took the tenth and was the first European athlete. He said: “The race went beyond our wildest expectations, since we had set a plausible target of 2 hours 10 minutes. The weather today was perfect and so were my feelings, the pacer did an ideal job and so all the fundamental conditions aligned in our favour. At halfway the pace was very fast, and I suffered the last 6 kilometres with cramp, also having to watch my footing to contain the problem. To make the best debut ever by an Italian in a marathon is something special, and to do it in my city is something romantic. My future will focus on the marathon, but I still have a lot of ambitions for the track, where I definitely want to improve all my personal bests on the track.”

Andrea TRABUIO, Director of the Milano Marathon and Head of Mass Events RCS Sports & Events – RCS Active Team, commented: “What a celebration for the 20th edition! So many champions, so many participants, and a time result that keeps us in the world excellence. The goal has been achieved.”

Filippo TORTU, Olympic champion of the 4×100 metre relay in Tokyo 2020, said: “My world is opposite to that of the marathon, but we have many things in common: enthusiasm, the wish to practice a sport, to get involved, to train to improve all the time, to lower a minute in the marathon or a hundredth in the 100 metres. The Milano Marathon is a celebration, all the runners have fun, the public is involved, it’s a great showcase for our sport.”

Gaia SABBATINI, a middle distance runner with the Fiamme Azzurre that was one of the first female relay teams, said: “It was very exciting to watch the start of the marathon. It was my first time, and at the time I even wanted to run a whole marathon, but after finishing my 14 kilometre section I realised how tiring it is! From now on, I admire those who do it even more.”